The other major conflict is between people trying to stop the Living Dream pilgrimage generally speaking, the "Good Guys" and those trying to help them again generally, the "Bad Guys". There are more factions than you can shake a stick at, or than I can re-cap in a reasonable word count. Throughout all this massively third-person-limited-with-multiple-viewpoints narrative, we've also gotten bits and pieces of the Waterwalker's story, in relaxing third-person-limited-from-a-single-perspective. We've seen him grow from a humble farm boy into a nascent superhero Book One , an emerging power with full command of his abilities Book Two , and a mature and powerful statesman Book Three.

We also finally learn why the First Dreamer disappeared rather than broadcast his final dream to his followers. When we finally learn what the point of the whole story is, it is obviously meant to be a Big Reveal. So let me emphasize again: Spoiler Alert! In Book Two, Edeard gained the ability to manipulate time. He essentially gets a do-over whenever things go wrong. In Book Three, we see him use this power over and over again, like a video game where you have multiple restarts to get through a level.

The only personal cost to him is having to live portions of his life over and over again to the point where they become excruciatingly boring. There's also an iteration where he goes back so far and changes things so much that his favorite grandchild is never born. This fails to be a meaningful example of personal sacrifice to the audience, since we never got to know the child ourselves, we only know that Edeard liked him. Anyway, this is another series of tales that can go on for as long as the author desires.

Finally the Waterwalker lives through an iteration that satisfies him. He gets picked up by Skylords angels who recognize that he has lived to fulfillment whatever that means and escort him into the Heart of the Void i. As he leaves, he gifts his time-traveling powers to all the people of his world.

Now the narrative fast forwards to the point that we're told that all the people of that world use the power to perfect their lives, achieve fulfillment, and ascend to Heaven. I ask you: do you believe that is the mostly likely outcome of that scenario? How does the universe resolve itself when two individuals do two different reversions of the same time period? What if people were to constantly undo each other's do-overs? It'd be a cosmic-scale Wikipedia edit war! But we gloss over all these potential issues and are simply told: They did it and they were Happy!

Pay no attention to the paradoxes behind the curtain or swept under the rug! Back to the space chases! The Living Dream doesn't know about the bit where everyone gets to control time and go to Heaven. Inigo never shared that part. However, I can't imagine that would stop them, it's hardly a deterrent to a religious fanatic to know that Heaven is the guaranteed outcome. Inigo found the outcome terribly depressing, as we are meant to: having achieved utopia, everyone gets put into a static Heaven where nothing will ever change.

It turns out that the Void at the center of the Galaxy, otherwise known as the Heart or Heaven, is a refuge of the first aliens to ever achieve sentience in our galaxy. They advanced and evolved, but had no other beings to talk to. They assumed no other life would ever evolve, ever. So they retreated into a bubble. However, some of their automatic systems adapted to the humans who blundered into the Void and formed the original colony that the Waterwalker was part of. Those systems included the Skylords; they are also what granted new residents telekinetic powers and eventually the turn-back-time power don't think about that too hard--why would aliens convinced they're the only life in the universe leave the Skylords out there?

Void expansion is what happens when all these systems need more power; gobbling up a few star systems is not a problem if you think you're the only life forms around, after all. Our heroes in various configurations , having failed to stop the Living Dream ship from entering the Void, have to find a way to talk to those original aliens and tell them to make it stop.

As a backdrop to this, some Bad Guys are seeking to use the Void to achieve Uplift to post-human status, and some Good Guys are looking for different alien tech to the same purpose; this race will also have a bearing on who gets to talk to the First Ones first. And, surprise surprise, they do.

And after all those thousands of pages, it only takes about a chapter. Then there's a bit of denouement to tie off a couple of character arcs, and we're done. It's all a bit of a let down, really. A lot of character arcs don't get tied off, which seemed odd. You've already spent pages, you couldn't take 20 more to give everyone an ending? After we've followed all those points of view for forever? To review:. So far as depictions of Heaven go, this one seems like it has the author's thumb weighing heavily on the scale. Would all this be OK if it weren't for the expand-and-kill-star-systems part?

Because I've never actually heard of the Christian or Hindu or Pagan or Buddhist after-life dimensions having that effect. Or is it a metaphor for religious extremism and violence? Because there isn't really an equivalence between someone strapping on a suicide vest and someone whose Heaven is set up by aliens and powered by eating star systems. At least the Living Dream followers had some plausible deniability on the whole genocide issue, as presented in the books.

Of course, the opinions of the millions of actual Living Dream followers are never consulted. They're never given all the information, and they're certainly never given a choice. In fact, democracy doesn't fare well in these books.

While there is an official democracy based on Earth as part of the ANA faction, it is completely controlled by a few individuals. And at the beginning of Book 3, it's sealed off from the rest of the universe, confirming its irrelevance to the overall events of the novel. And Edeard takes unilateral control of his 'democratic' city, at first as a law man who uses his psychic powers to extra-judicially track down, torture and kill various Bad Guys behavior that the narrative never condemns and then to manipulate the outcome of various city-wide events via his do-over power.

Also depressing was getting to the end of the trilogy and realizing that entire plot lines and character arcs could have been profitably excised. It irked me to no end to realize that almost every scene dealing with a serial killer character that I found really annoying, who was revived from the first duology, was more or less pointless with regard to the main point of the trilogy. Frankly, the overall thrust and theme of the trilogy "Don't trust Utopias—there's always a catch and they'll kill you in the end" has been just as convincingly handled in one-off episodes of Star Trek and Stargate SG-1 , not to mention countless SF short stories.

While the plus pages were entertaining enough and it was easy to keep the pages turning, it was hardly worth it if that was the payoff. I didn't feel this way at the end of pages of the first duology. 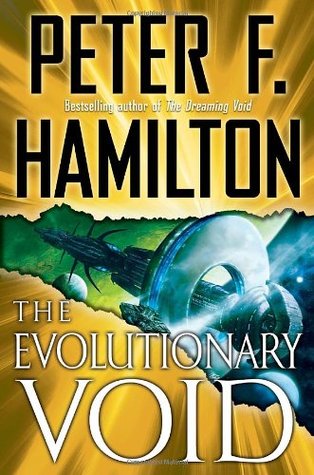 There are factions and arguments and mysteries and chases, but in the end we are able to contain the alien threat. The End.

Those pages delivered on the promise of entertainment, made good on its plot, and were an overall satisfying experience. That's one of the reasons that I was willing to tackle the new trilogy, with similar expectations. When I found out that everything was a set-up for a quite preachy moral that I already somewhat agree with, I felt like the victim of a rather epic bait and switch.

The Dreaming Void, The Temporal Void, The Evolutionary Void

So if you like your adventure stories fun and epic, with enough viewpoint characters to cast a Gilbert and Sullivan production, you like to buy your written entertainment by the pound and you don't mind some preachiness in the climax, then the Void trilogy is the right SF for you. You're welcome to it. Karen Burnham is vocationally an engineer and avocationally a speculative fiction reviewer.

She blogs at the Spiral Galaxy Reviewing Laboratory. She can be emailed at karen. In Night's Dawn he explicitly puts the two things in opposition - Adamists vs Edenists - and comes down on the side of God and the fact man must be made in his image. I started with the three "Mindstar Rising" books, then went on the the "Pandora's Star" duology and then the "Void" books.

How heavy-handedly does he come down in Night's Dawn? Maybe his message varies, and he's just a bit ham-fisted on whatever the moral is this time. Hamilton's trick is "great narratives, clueless about endings. But it was planned in advance The ending does involve a literal deus ex machina though Thanks for the replies.